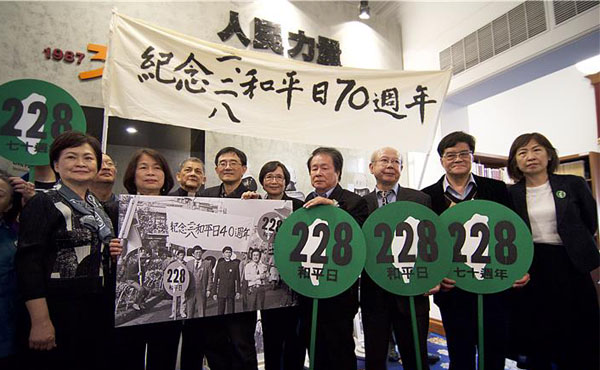 The foundation offers material compensation and spiritual consolation to 228 Massacre victims. Its operations since 1995 include the following,

The preliminary job of the foundation is to examine applications for compensation and hand out compensation. The board of directors is authorized by law to set up procedure for the review of applications and to lay down standards for giving compensation which is commensurate with the level of suffering the victims experienced, with the maximum allowable amount being NT$6 million (US$181,214). From 1995 To 2006, the foundation approved compensation in 2,264 cases, including 680 cases wherein the victim died in the massacre, 179 case wherein the victim was unaccounted for, and 1,405 other cases (including victims who suffered from imprisonment, injuries or damage to reputation). A total of 9,420 persons (including the victims and family members of deceased victims) have received compensation amounting to about NT$7.2 billion (US$217.45 million) altogether, and all of it was financed by the government.

2. Searching for the truth behind the massacre and making it known to the public:

With regard to giving the public knowledge about the massacre, the foundation has set up a Web site, published a bulletin, printed teaching materials, produced films featuring the massacre (including "The Trauma of 228" and "Formosa Lily") , financed the publishing of textbooks on the incident and held publicity campaigns aimed at raising public awareness of the massacre. As to searching for the truth behind the massacre, the foundation has published "The 228 Massacre: A documentary Collection and Historical Materials" in 2002, "The 228 Massacre: Research Report on Responsibility For the 228 Massacre" in 2006, compiled "The Dictionary of 228 Massacre", organized seminars on the massacre (1997-2007), recorded interviews with witnesses to and victims of the incident, and held group discussions of massacre victims.

In order to heal the historical wounds, the foundation holds a national memorial ceremony on Feb. 28 every year wherein the head of the state delivers a keynote speech, holds Buddhist and Christian ceremonies to console the minds of the victims and their family members; pays visits and offers financial aid to senior victims, victims' widows, and victims' low-income family members, set up scholarships for victims' descendants, inters the remains of the victims. In order to restore the reputation of the victims, the president of the country has awarded rehabilitation certificates to the victims or their family members on formal occasions and recorded their sufferings in reports carried on the government's bulletin.