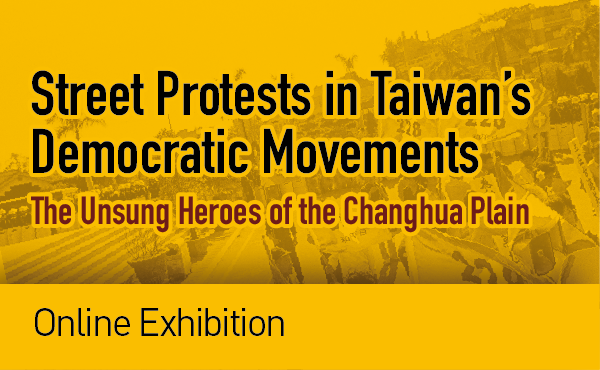 From dictatorial to democratic, Taiwan’s democracy was been hard-won through the sacrifices of brave individuals, many of whom paid with their freedom, and some, with their lives.

From the 1980s up to the first peaceful transition of power in 2000, street protests in Taiwan surged. Numerous grassroots organizations devoted themselves to advocating for democracy, despite the inherent dangers of doing so under the yoke of authoritarianism. In order to pursue democracy, freedom, and justice, they bravely challenged dictatorship. They did this despite threats from Taiwan Garrison Command and the state security forces, as well as being blocked by barbed wire and barricades when confronting the police on the ground. Oftentimes dispersed by water cannons or ruthlessly beaten by the riot police, many ended up injured or hospitalized, but still undeterred. The passion and courage of these selfless unsung heroes who helped shape Taiwan’s democratization will not be forgotten. 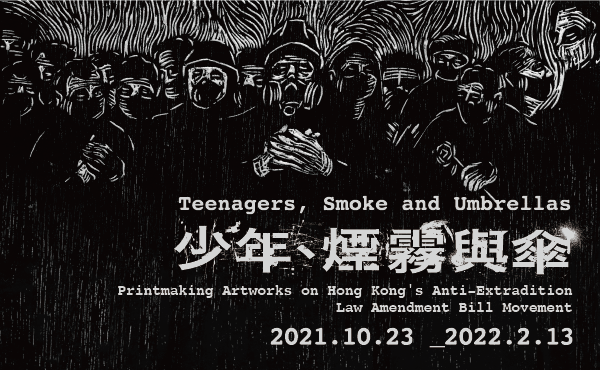 In order to arouse more attention to Hong Kong's human rights problems as well as keep supporting its pro-democracy movement, we invite the Malaysian printmaker Tekkhean Lee to display his works on the Anti-Extradition Law Amendment Bill Movement. 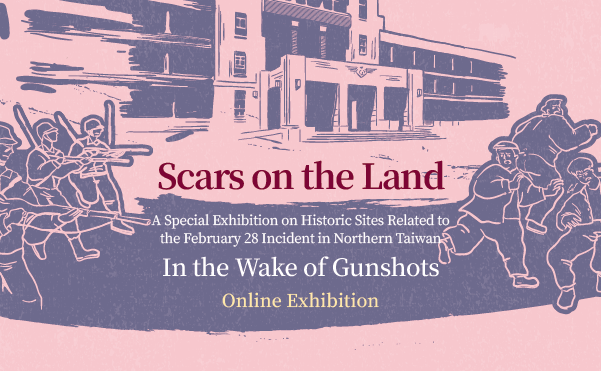 Online Exhibition
Scars on the Land: The Historic Sites Related to the February 28 Incident in Northern Taiwan
Second part: In the Wake of Gunshots

On March 1, some Taiwanese legislative representatives convened a committee dedicated to dealing with the contraband tobacco investigation that had resulted in bloodshed. Hoping to bring about a satisfactory resolution to the incident, the committee was reorganized into the February 28 Incident Settlement Committee on March 2, and its members held an assembly at Zhongshan Hall, to which people from various fields were invited. On March 4, the committee notified local councilors in a total of 17 Taiwanese cities and counties of the need to establish settlement committees in their own municipalities. For a while, it seemed that everyone was becoming optimistic about how the impact of the crisis was to be handled. However, just as many settlement committees at the municipal level were being set up, Chen Yi, Taiwan's chief executive, sent a telegram to Chiang Kai-shek asking if he could dispatch troops from China to his aid. On the one hand, Chen Yi asked for military reinforcements to be sent by the central government while he mobilized the existing armed forces on the island. On the other hand, he publicly declared that he would not carry out a military crackdown. His double-faced approach let the incident escalate to a point where it could not end peacefully. 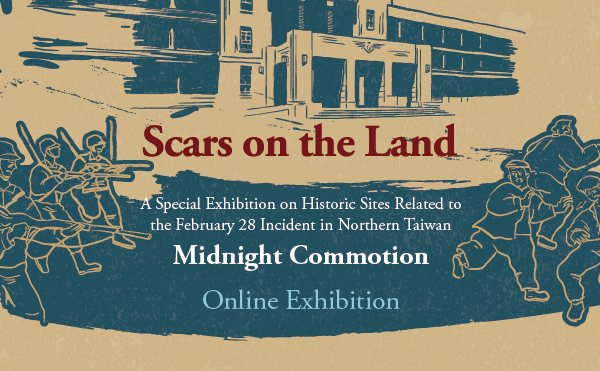 Online Exhibition
Scars on the Land: The Historic Sites Related to the February 28 Incident in Northern Taiwan

Drawing upon two dimensions, the chronology of the February 28 Incident and the spatiality of the incident's development in local counties and cities, this exhibition is arranged into three parts. The first part covers the early post-war years in Taiwan, the killing associated with a contraband tobacco confiscation that took place on February 27, 1947 near Taipei's Tianma Tea House, the epicenter of the incident, and subsequent developments until the temporary introduction of martial law was declared on March 1 of the same year. The second part portrays how Taiwanese people who lived in the counties and cities to the west of Taipei and to the south of Tamsui River gathered together in meetings and discussed how to react to the ongoing situation after receiving news of the conflict in Taipei, as well as how the Nationalist government's army clamped down and conducted "village cleansing" after arriving on the island on March 8. The last part focuses on interactions between civilians and the government that occurred in the northeastern area of Taiwan to the east of Taipei as well as in Yilan and Hualien counties in eastern Taiwan, and particularly on the indiscriminate shootings and public executions perpetrated by the 21st Division of the Nationalist government's army soon after it landed at the Port of Keelung, causing significant casualties among civilians. The locations of historic sites that are included in this exhibition span several cities and counties, namely the Greater Taipei area, Keelung, Taoyuan, Hsinchu, and Miaoli, as well as Yilan and Hualien in eastern Taiwan.

This exhibit combines images of historical trails with traditional and digital displays, taking you through half a century of buried historical truth. It wasn't until after the democratization of Taiwan that the truth was gradually revealed. 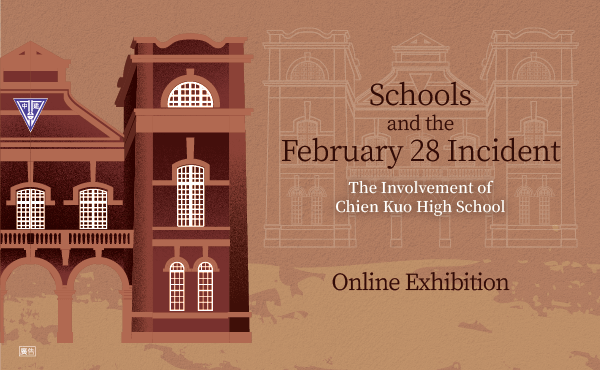 During its history of more than 120 years, the school witnessed the Japanese colonial period, the Taihoku Air Raid before the end of the Second World War, and the post-war rehabilitation period after the Chinese Nationalist government took control of Taiwan. It also lived through autocracy, dictatorship and the martial law period, during which time people were deprived of freedom of speech. Before the democratization of Taiwan, different generations of students and teachers from this school listened to their conscience and stood up against the injustices of the time, which unfortunately resulted in the imprisonment or execution of many. At one point, the school's principal was even detained by the Taiwan Garrison Command for several months simply for attempting to have his students released from custody. The cruel arrests, forced disappearances, torture, and executions by shooting that were inflicted on students and teachers after the outbreak of the February 28 Incident left an indelible mark not only on school itself, but also on Taiwan's democratic development in the 20th century. Only by learning more about their experiences can one understand the importance of transitional justice and the controversy over the removal of the "entrance monument," a statue of Chiang Kai-shek, behind the school's front gate.

Online Exhibition
The 1987 Awakening of the People:
A Photographic Exhibition Witnessing Korea’s Democratization

The historical process of Korea’s democratization in the 20th century shares many similarities with that of Taiwan, as not only were both nations previously colonized by the Japanese and subsequently ruled by military dictatorships, but their democratic development was also successfully prompted by people power in both cases.

In Taiwan, the origin of this longing was the February 28 Incident in 1947; while in Korea, it was the May 18 Gwangju Democratization Movement (also known as the Gwangju Uprising) in 1980.

In 1987, a Korean-based correspondent from a Taiwanese newspaper candidly recorded the protest scenes of the June Struggle, preserving many precious records for history. These images bring us back to scenes where blood and tears were shed and pro-democratic slogans were chanted.

We hope that the general public can come together to understand and appreciate the value of democracy and freedom through these valuable photographs.

Chen Wu-jen was born in Wanluan, Pingtung in 1949 during the period of martial law, when Taiwan was ruled by an authoritarian regime. When he was enlisted in the Zuoying Naval Recruit Training Center in 1969, he wrote the words "Opposing the central government and the Chinese Nationalist Party" on his aptitude test paper. Prosecuted for the "crime of rebellion," he was later transferred to a military court for a trial and sentenced to two years imprisonment for having violated Article 7 of the Anti-Insurgency Law. He gave up the right to appeal the ruling and was later transferred to Taiyuan Prison. As a political prisoner, Chen Wu-jen experienced physical incarceration as well as mental and psychological trauma, and even his family members were politically oppressed. This drove him to use paintbrushes and sculpting knives to translate his misery and agony into art pieces that reminded his fellow Taiwanese they should never forget how Taiwan was ruthlessly ravaged during the February 28 Incident and the White Terror period.

In 2017, the 228 National Memorial Museum organized "Names in the Wind," an oil painting exhibition, in cooperation with the artist. In 2020, the 228 National Memorial Museum worked with Chen Wu-jen once again to organize "That Day and the Days After: The Chen Wu-jen February 28 Incident Art Series Exhibition," featuring ten wood sculpture works from the Slaughter series and 18 oil paintings from the Family series. His artworks re-interpret the moment when victims were shot dead in the February 28 Incident and the torment experienced by victims' families thereafter, helping us revisit the never-ending pain that separates the history of Taiwan into that day and the days after.

Online Exhibition
After 228 - How the generations talk

During the period of martial law, the February 28 Incident was a taboo topic, and many Taiwanese were unable to be familiar with the history of the island. As online communities have well developed in recent years, more people have begun to turn their attention to contemporary social issues outside the formal education system. Based on historical research, the creators attempt to portray stories on this land from perspectives that vary with the rise of democracy and reflect the different perceptions of the February 28 Incident among generations. As the differences create possibilities for dialogues, we hope to gain a deeper understanding of the February 28 Incident, democracy as well as human rights.

Throughout his life, Chang Wan-chuan kept a comfortable distance from the mainstream of the Taiwanese art world and even from tertiary art education. Never trying to appease the aesthetic tastes of society or yield to the mainstream standards of art, he pursued what he believed to be the true manifestation of artistic creation. His styles, paints, themes and even brush strokes were never trapped in a certain mode. Instead, he confidently demonstrated a style of his own throughout his works. Even when he received negative newspaper reviews from art critics, his insistence on "being oneself" did not change.

This special exhibition focuses on the first half of Chang Wan-chuan's life, spanning the beginning of his fine arts education, the selection of his art pieces once for the Taiwan Art Exhibition (also known as Taiten) and four times for the Taiwan Governor-General's Art Exhibition (also known as Futen), his founding of an art association, and his settling down to work as a school teacher. A total of 25 pieces are on display. Chang held the belief that "the most authentic art is that which arises from daily life" as his guiding principle and put this into practice over time. Having experienced the Japanese colonial period, the February 28 Incident, the martial law period, and the post-democratization period, he braved hardship in a proud and unyielding way regardless of how circumstances changed, and left behind a new chapter in Taiwan's modern art history.